In June 1996 the stars above aligned and I purchased Lot Five of Oak Island from Frederick G. Nolan. I still recall my first steps on the property as its proud owner feeling destined to have arrived and that together with my new friend and cohort Fred we were slated for the adventures of a lifetime.

My introduction to the subject of Oak Island had occurred 16 years prior when by pure happenstance I signed out a copy of D'Arcy O’Conner’s book “The Money Pit” from my local Toronto library. I was so smitten by the tales D'Arcy spun that I took a road trip to Nova Scotia in the summer of 1980 with the specific intent of scoping out this Canadian treasure island first-hand.

After a long journey that started from what seemed like a world away I finally arrived at my destination with Oak Island now a mere 600' away. Parking my vehicle at Crandall Point I proceeded to walk across the infamous Dunfield causeway, each step drawing me closer to the muse of my travel when I happened to notice someone waiting to intercept me on the island side. Following an exchange of pleasantries I found myself talking with Dan's wife Jane Blankenship and then, subsequent to paying her the price of admission I was treated to a solo tour of the oh so modest Oak Island Museum, examining everything on display while being mindful to keep pace with Jane's fervent tutorial. Afterwards I was allowed to walk the island at my leisure, alone but for thoughts of all things Oak Island and merrily taking pictures of anything that caught my interest. I did not encounter another soul as I wandered around the island but did observe fresh activity at Borehole 10X in the guise of machinery noise and water pumping. Having worked for several years in the Alberta oil patch as a roughneck/motorman I was primed to appreciate the type of work Triton Alliance was doing but was somewhat taken aback by the contrasts in scale and the general level of acumen on display. Eventually, with my heart's content satisfied I departed the island cognizant that I'd just experienced something unfamiliar, like a melange of surreal imagery mashed with visceral sensory overtones yet nonetheless felt convinced beyond a reasonable doubt that Oak Island's fabled folklore had far more in common with fact than fiction.

Upon returning back home to Ontario any further thoughts of Oak Island were shelved in my subconscious as I dealt with the realities of everyday life and the task of earning a living. I was devoted to my new company Chase Of Toronto and for the next 15 years my attention was focused on designing/manufacturing custom solid wood furniture along with teaching cabinetmaking apprenticeships in conjunction with a local community college and writing feature articles for the publication Canadian Workshop Magazine.

As the years rolled by I began to feel played out by that line of work and was avidly searching for ways to expand my horizons. Serendipity knocked on my door when for Christmas 1994 my sister Susan gave me a copy of William S. Crooker’s new book “Oak Island Gold” and upon its reading was impressed by the discoveries that had come to light since my first visit. I decided to write the author to inquire if there may be possible investment opportunities and Bill kindly responded by suggesting that I contact Fred Nolan. Over the next 6 months Fred and I regularly exchanged thoughts and in the summer of 1995 I came out to Nova Scotia for an upfront and personal tour. Some have wondered how I ended up owning part of world famous Oak Island and the simple truth is that after meeting with Fred and sizing up the situation I then asked if he would sell me Lot Five to which he replied in the affirmative.

It would take me the better part of a year to wrap things up in Ontario and fulfill my obligations as per our hand written, two paragraph contract but both Fred and I were patient and each was true to his word. Finally, in June 1996 Lot Five's ownership was transferred and our agreement became a fait accompli. Moving ever forward from that moment my new life in "Canada's Ocean Playground" had commenced in earnest.

At each corner of Lot Five there are vestiges of ancient dry stone walls that precisely correlate to the original 1762 survey and with certitude make Lot Five among the best defined lots on the entire island. Additionally, Lot Five's property lines have been further embellished in modern times by 40' wide cleared swaths running along the length of each side that were cut entirely on the adjoining Lot Four and Lot Six. These were created by Dan Blankenship in response to the protracted legal battles of the 1980's in which ultimately the Supreme Court of Nova Scotia dismissed Triton Alliance's arguments and ruled in Fred Nolan's favor (Triton not once but twice contested his rightful ownership of Lot Five and Lots Nine through Fourteen in the courts).  As Dan would confirmed to me years later, the purpose of these clear cuts was to keep track of Fred to make sure he wasn't trespassing but this action failed to cause Fred any bother and did no harm or foul to his properties. Indeed these clearings only served to highlight Fred's lots and explains why when viewed from above the boundaries of Lot Five, the western property line of Lot Nine and the eastern property line of Lot Fourteen are all so easily discerned. In Oak Island parlance they are referred to as the "spite lines" and that is very apropos.

Long before I acquired Lot Five and likely in large part a consequence of these contentious court cases, Fred was being denied road access to his properties by the other landowners. The Island is connected to the mainland via a single lane, non-vented 600' causeway which was constructed during Robert Dunfield's tenure in the 1960's to get his 70 ton drag line crane on and off the island. Although unambiguously stipulated to be a temporary structure, with flagrant defiance of common sense it remains in place as was originally built and continues to perpetuate several degrees of consternation amongst its neighbors in Western Shore including it should be mentioned the indigenous salmon of nearby Gold River. That said, the causeway is controlled by the Nova Scotia Government and as such Fred could have reached an agreement for its use. Of still further relevance, since part of Fred's properties contributed to the making of the island's Centre Road the court awarded him an easement permitting full use of that road. However, the private section of road that connects the causeway to the Centre Road was gated and declared off limits to him by his fellow landowners. An easement would have been granted had Fred's lots been technically land locked but since each had water frontage it was denied. That succinctly answers the question "how" they are able to restrict access but to address the folly of "why" one would need to press them to enunciate their rationale.

These are the conditions under which I purchased Lot Five and despite sincere effort on my part to remedy the situation are those by which I must still abide. For the record, in my 24 years of land ownership at Oak Island I have never once been permitted to drive to my property because of this quirk in the law that, by their sole discretion, my neighbors continue to enforce. Consequentially by my calculation since 1996 I have taken over 4,500 round trips by boat to the island, all by means of my beloved 16.5' LUND runabout "Relic" and her sidekick tender "Bubbles" (they were christened in deference to characters on the Canadian TV shows "The Beachcombers" and "Trailer Park Boys").

On a positive note, I am the last member standing from history's motley group of landowners and adventurers who would only ever know a formidable Island, not just some easy peasy peninsula - an audacious fraternity and heady company indeed. 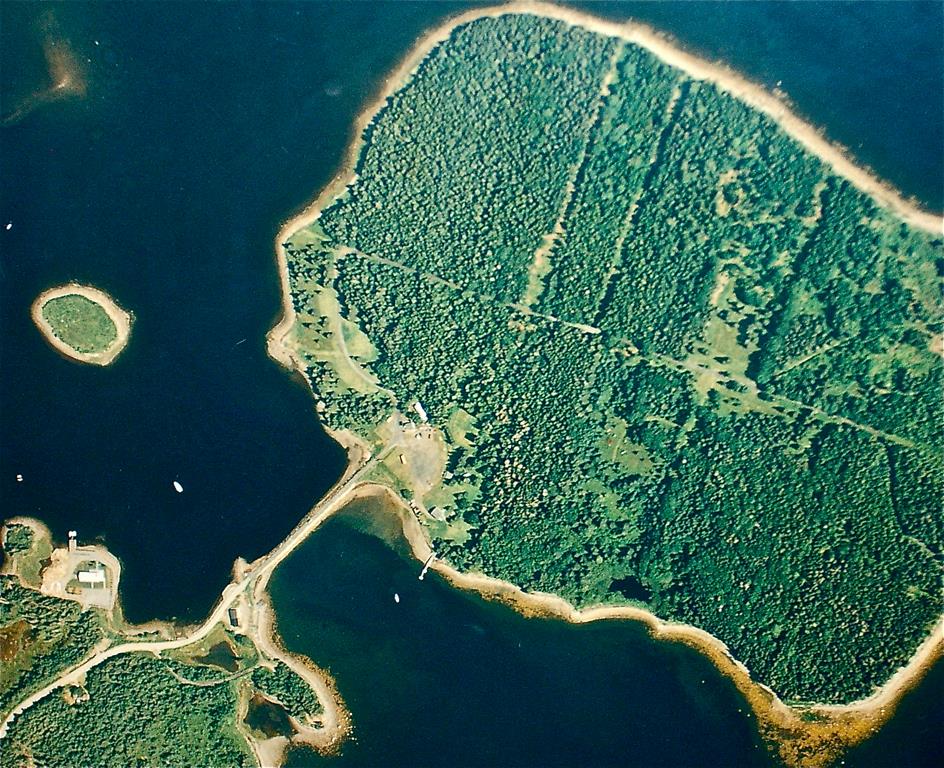 Lot Five has an inherently diverse mix of hardwoods and softwoods with a smattering of old growth oak, pine and maple trees, her forest floor playfully spongy to the step as per the innumerable unchecked cycles of decomposition and regeneration. I heartily espouse the practice of silviculture and today Lot Five stands as a testament to the many benefits of responsible forest management.

With regard to the island's storied red oak trees many dodgy and spurious accounts keep circulating as to their current state advanced by quasi-know-alls who postulate the false notion they're in a death spiral due to disease, insect infestation, deforestation or already long dead. Dr. R. V. Harris while researching his book "The Oak Island Mystery" studied the growth rate of red oaks on the island with results that determined a tree with a diameter of 16" was 200 years old. Today Lot Five is home to 28 healthy red oaks that best that mark including over a dozen bona fide old growth specimens boasting diameters from 22” to 36". Every oak on Lot Five has been identified, photographed and tagged for long term study and although the largest of these are now nearing the end of life cycle, their progeny continue to populate the island and are well poised to vanguard the dynasty into perpetuity. They are a robust, handsome tree that will typically attain full height early in life to stake claim to the prized open space above and then will bide the centuries to bulk out their girth. In old age they often end up resembling wonky umbrellas with a wide, flattish canopy atop a long, straightish trunk that through time tends to shed its lower branches. Multitudes of oaks abound around the island, of particular note is a spectacular grove that mirrors the western property line of Lot Nine running its length from the Centre Road down to the shoreline. The species of red oak found on Oak Island is Quercus rubra L.

Compared to the other lots on the island Lot Five is without peer, the proverbial odd one out that's never been ploughed, clear-cut, excavated or built upon and with a nod to posterity provides the quintessential coup d'oeil of a once pristine, unsullied Oak Island.